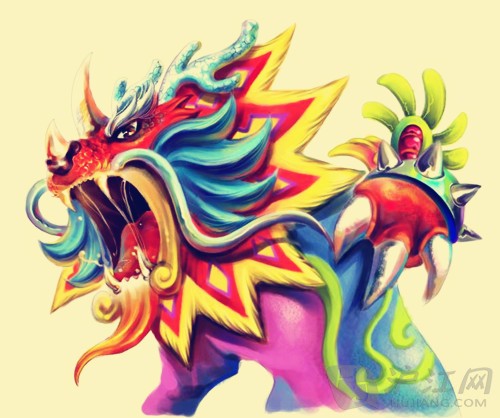 The Origin of Chinese New Year

Chinese new year, pronounced in chinese as "xin nian", always falls on the date of marking the beginning of the spring and thus it is also called the "spring festival". "xin" means "new" and "nian" means "year". there are many stories told about the origin of "nian", which actually is a name of animals.

The old story says that the beast "nian" with a very big mouth was so fierce and could swallow many people in one single bite. people were very scared. an old man offered to subdue "nian" and said to "nian": "I hear that you are very capable, but can you swallow the other beasts instead of people who are by no means of your worthy opponents?" so "nian" swallowed many of the other beasts that hurt people and their domestic animals. the old man turned out to be an immortal god and riding the beast "nian" flied to the heaven. now that "nian" is gone and other beasts were also scared into forests, people began to enjoy their peaceful life. before the old man left, he had told people to put up red paper decorations on their windows and doors at each year's end to scare away "nian" in case it sneaked back again, because red is the color the beast feared the most.

From there on, the term "guo nian" has the meaning of "pass-over" or "survive" the "nian". by tradition, chinese businesses had to pay off all debts by the year-end and thus if they could get it over, it is worth for the celebration of the new year.

Today people still put up red paper and firing firecrackers as way of celebration. "guo nian" becomes a tradition of celebration for thousand of years.