China is a land of bicycles. At least it was back in 1992 when I traveled the country. Back then everyone seemed to be riding a bicycle. Millions of them, all black. Cars were rare. Yet since my arrival in Beijing last year, I've found the opposite is true. There are millions of cars. However, people still use their bicycles to get around. For many, it's the easiest and cheapest way to travel today. Bicycles also come in different colors—silver, green, red, blue, yellow, whatever you want.

It's fun watching people biking. They rush quickly through crossroads, move skillfully through traffic, and ride even on sidewalks(人行道)．Bicycles allow people the freedom to move about that cars just can't provide.

Eager to be part of this aspect of Chinese culture, I decided to buy a bicycle. Great weather accompanied my great buy. I immediately jumped up on my bicycle seat and started home.

My first ride home was orderly(守秩序的)．To be safe, I stayed with a “pack” of bikers while cars on the streets came running swiftly out of nowhere at times. I didn't want to get hit. So I took the ride carefully.

Crossing the streets was the biggest problem. It was a lot like crossing a major highway back in the United States. The streets here were wide, so crossing took time，skill and a little bit of luck.

I finally made it home. The feeling on the bicycle was amazing. The air hitting my face and going through my hair was wonderful. I was sitting on top of the world as I passed by places and people. Biking made me feel alive.

56．According to the author, why are bicycles still popular in China today?

A．Because they are traditional and safe.

B．Because they are convenient and inexpensive.

C．Because they are colorful and available.

D．Because they are fast and environment friendly.

A．to ride it for fun

B．to use it for transport

58．How did the author feel about his street crossing?

59．Which of the following best describes the author's biking experience?

B．The author was annoyed by the air while riding.

C．The author was praised by the other bikers. 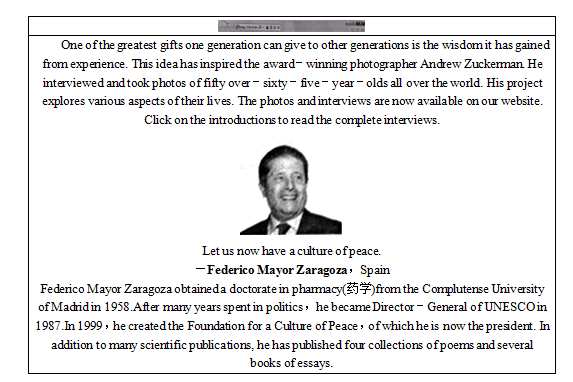 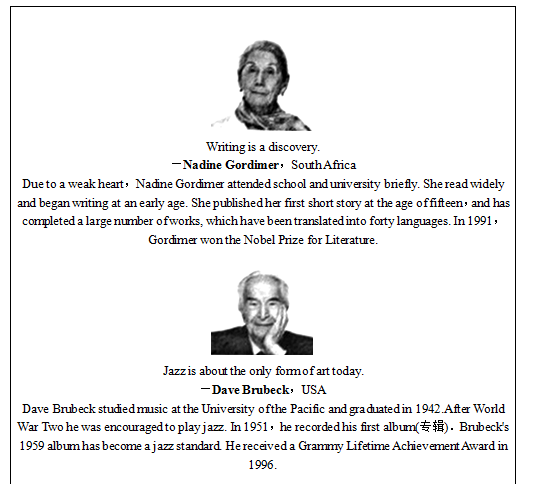 In 1947 a group of famous people from the art world headed by an Austrian conductor decided to hold an international festival of music，dance and theatre in Edinburgh. The idea was to reunite Europe after the Second World War.

It quickly attracted famous names such as Alec Guinness, Richard Burton, Dame Margot Fonteyn and Marlene Dietrich as well as the big symphony orchestras(交响乐团). It became a fixed event every August and now attracts 400，000 people yearly.

At the same time, the “Fringe” appeared as a challenge to the official festival. Eight theatre groups turned up uninvited in 1947，in the belief that everyone should have the right to perform，and they did so in a public house disused for years.

Soon，groups of students firstly from Edinburgh University, and later from the universities of Oxford and Cambridge，Durham and Birmingham were making the journey to the Scottish capital each summer to perform theatre by little－known writers of plays in small church halls to the people of Edinburgh.

Today the “Fringe”，once less recognized, has far outgrown the festival with around 1，500 performances of theatre，music and dance on every one of the 21 days it lasts. And yet as early as 1959，with only 19 theatre groups performing，some said it was getting too big.

A paid administrator was first employed only in 1971, and today there are eight administrators working all year round and the number rises to 150 during August itself. In 2004 there were 200 places housing 1，695 shows by over 600 different groups from 50 different countries. More than 1.25 million tickets were sold.

64．What was the purpose of Edinburgh Festival at the beginning?

A. To bring Europe together again.

B. To honor heroes of World War Ⅱ.

65. Why did some uninvited theatre groups come to Edinburgh in 1947?

A. They owned a public house there.

B. They came to take up a challenge.

C. They thought they were also famous.

D. They wanted to take part in the festival.

66. Who joined the “Fringe” after it appeared?

C．Artists from around the world.

D. Performers of music and dance.

A. has become a non-official event

B. has gone beyond an art festival

C. gives shows all year round

“People are ruder today because they are rushed and more ‘time poor’ than ever before，” says Patsy Rowe, “Manners_have_fallen_off_the_radar(雷达)．” Due to our strong attraction to electronic equipment it is a wonder more people don't wake up each morning and greet the singing birds with a complaint(抱怨)about the noise. Here are some examples of rudeness.

Some people prefer to do almost everything over the Internet. To them, dealing with an actual human is like an evolutionary step backward. It feels very slow because humans don't work at 4G speeds. When you have dinner with friends, you will often notice someone paying more attention to his mobile phone. We have programmed ourselves to think that every new message brings life-changing news, so taking calls and checking our texts are more important than talking to the people we are with. What is worse, some people even tend to send anonymous(匿名的) rude messages by email.

However, rudeness is never acceptable. Don't assume it is OK to be rude if the person you're in touch with won't recognize you. If you have something awful to say, have the courage to face the person and say it, write a letter or email and sign it, or forget it. Upsetting people with unsigned messages is cruel and disgusting.

We shouldn't blame technology for our shortcomings. Technology is here to help us，but we should not allow it to take over our lives. An important step is acknowledging our shortcomings. People spend a lot of time pointing out bad manners but it would be even more helpful if we'd publicly acknowledge good manners when we see them.

68．What can be inferred from the underlined sentence in Paragraph 1?

C．People care little about their behavior.

D．Radar can be used to predict human behavior.

B．they are growing too independent

C．they have to handle many important messages