59. A. Furthermore B. Therefore C. However D. Otherwise

63. A. taking off B. getting along C. holding out D. turning back

Section B
Directions: Read the following three passages. Each passage is followed by several questions or unfinished statements. For each of them there are four choices marked A, B, C and D. Choose the one that fits best according to the information given in the passage you have just read.

A
For some people, music is no fun at all. About four percent of the population is what scientists call “amusic.” People who are amusic are born without the ability to recognize or reproduce musical notes (音调). Amusic people often cannot tell the difference between two songs. Amusics can only hear the difference between two notes if they are very far apart on the musical scale.

As a result, songs sound like noise to an amusic. Many amusics compare the sound of music to pieces of metal hitting each other. Life can be hard for amusics. Their inability to enjoy music set them apart from others. It can be difficult for other people to identify with their condition. In fact, most people cannot begin to grasp what it feels like to be amusic. Just going to a restaurant or a shopping mall can be uncomfortable or even painful. That is why many amusics intentionally stay away from places where there is music. However, this can result in withdrawal and social isolation. “I used to hate parties,” says Margaret, a seventy-year-old woman who only recently discovered that she was amusic. By studying people like Margaret, scientists are finally learning how to identify this unusual condition.

Scientists say that the brains of amusics are different from the brains of people who can appreciate music. The difference is complex, and it doesn’t involve defective hearing. Amusics can understand other nonmusical sounds well. They also have no problems understanding ordinary speech. Scientists compare amusics to people who just can’t see certain colors.

Many amusics are happy when their condition is finally diagnosed (诊断). For years, Margaret felt embarrassed about her problem with music. Now she knows that she is not alone. There is a name for her condition. That makes it easier for her to explain. “When people invite me to a concert, I just say, ‘No thanks, I’m amusic,’” says Margaret. “I just wish I had learned to say that when I was seventeen and not seventy.”

65. Which of the following is true of amusics?
A. Listening to music is far from enjoyable for them.
B. They love places where they are likely to hear music.
C. They can easily tell two different songs apart.
D. Their situation is well understood by musicians.

66. According to paragraph 3, a person with “defective hearing” is probably one who __________.
A. dislikes listening to speeches B. can hear anything nonmusical
C. has a hearing problem D. lacks a complex hearing system

67. In the last paragraph, Margaret expressed her wish that __________.
A. her problem with music had been diagnosed earlier
B. she were seventeen years old rather than seventy
C. her problem could be easily explained
D. she were able to meet other amusics

68. What is the passage mainly concerned with?
A. Amusics’ strange behaviours. B. Some people’s inability to enjoy music.
C. Musical talent and brain structure. D. Identification and treatment of amusics. 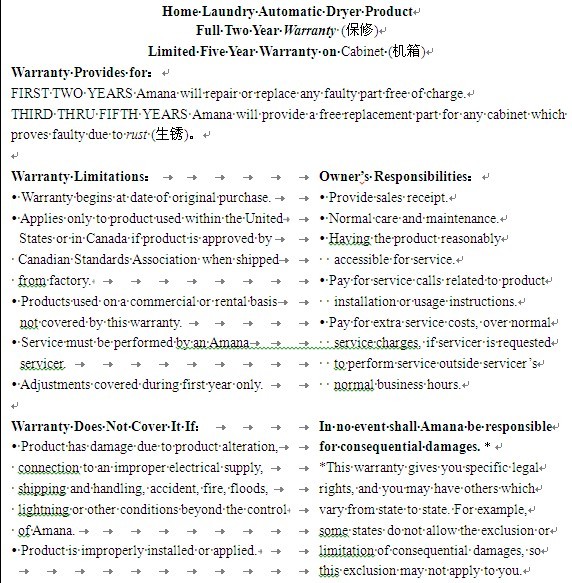 69. According to Warranty Limitations, a product can be under warranty if __________.
A. shipped from a Canadian factory B. rented for home use
C. repaired by the user himself D. used in the U.S.A.

70. According to Owner’s Responsibilities, an owner has to pay for __________.
A. the loss of the sales receipt B. a servicer’s overtime work
C. the product installation D. a mechanic’s transportation

71. Which of the following is true according to the warranty?
A. Consequential damages are excluded across America.
B. A product damaged in a natural disaster is covered by the warranty.
C. A faulty cabinet due to rust can be replaced free in the second year.
D. Free repair is available for a product used improperly in the first year.

C
A team of engineers at Harvard University has been inspired by Nature to create the first robotic fly. The mechanical fly has become a platform for a series of new high-tech integrated systems. Designed to do what a fly does naturally, the tiny machine is the size of a fat housefly. Its mini wings allow it to stay in the air and perform controlled flight tasks.
“

It’s extremely important for us to think about this as a whole system and not just the sum of a bunch of individual components (元件),” said Robert Wood, the Harvard engineering professor who has been working on the robotic fly project for over a decade. A few years ago, his team got the go-ahead to start piecing together the components. “The added difficulty with a project like this is that actually none of those components are off the shelf and so we have to develop them all on our own,” he said.

They engineered a series of systems to start and drive the robotic fly. “The seemingly simple