The everyday signs of conscientiousness (认真尽责)—being punctual, careful in doing work, self-disciplined, and scrupulous ( 一丝不苟的) in attending to responsibilities—are typical characteristics of the model organizational citizen, the people who keep things running as they should. They follow the rules, help out, and are concerned about the people they work with. It’s the conscientious worker who helps newcomers or updates people who return after an absence, who gets to work on time and never abuses sick leaves, who always gets things done on deadline.

Conscientiousness is a key to success in any field. In studies of job performance, outstanding effectiveness for almost all jobs, from semi鄄skilled labor to sales and management, depends on conscientiousness. It is particularly important for outstanding performance in jobs at the lower levels of an organization: the secretary whose message taking is perfect, the delivery truck driver who is always on time.
Among sales representatives for a large American car manufacturer, those who were most conscientious had the largest volume of sales. Conscientiousness also offers a buffer (缓冲) against the threat of job loss in today’s constantly changing market, because employees with this quality are among the most valued. For the sales representatives, their level of conscientiousness mattered almost as much as their sales in determining who stayed on.

There is an air around highly conscientious people that makes them seem even better than they actually are. Their reputation for dependability influences managers爷evaluations of their work, giving them higher evaluations than objective measures of their performance would predict.

But conscientiousness in the absence of social skills can lead to problems. Since conscientious people demand so much of themselves, they can hold other people to their own standards, and so be overly judgmental when others don爷t show the same high levels of model behavior. Factory workers in Great Britain and the United States who were extremely conscientious, for example, tended to criticize co-workers even about failures that seemed unimportant to those they criticized, which damaged their relationships.

When conscientiousness takes the form of living up to expectations, it can discourage creativity. In creative professions like art or advertising, openness to wild ideas and spontaneity (自发性) are scarce and in demand. Success in such occupations calls for a balance, however; without enough conscientiousness to follow through, people become mere dreamers, with nothing to show for their imaginativeness. 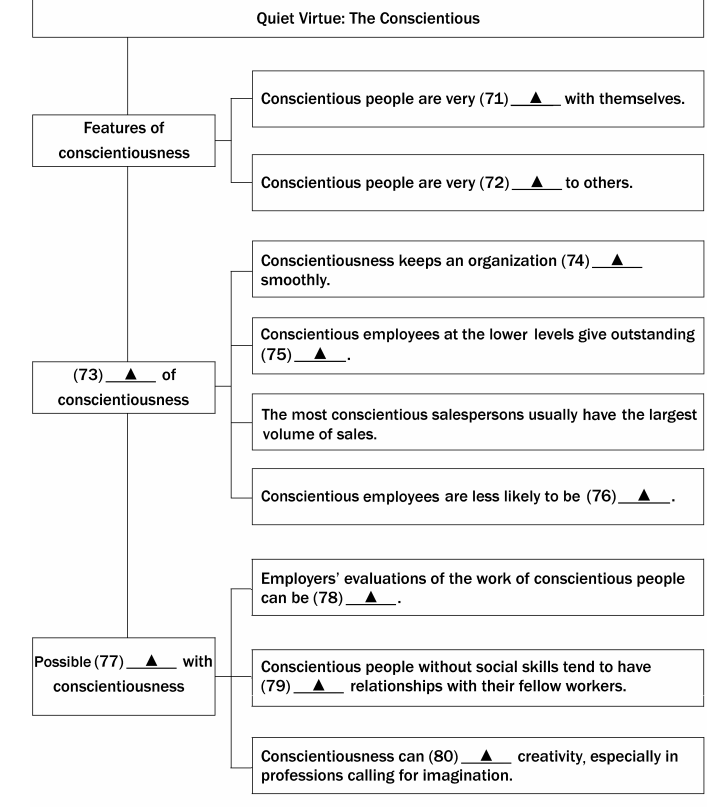