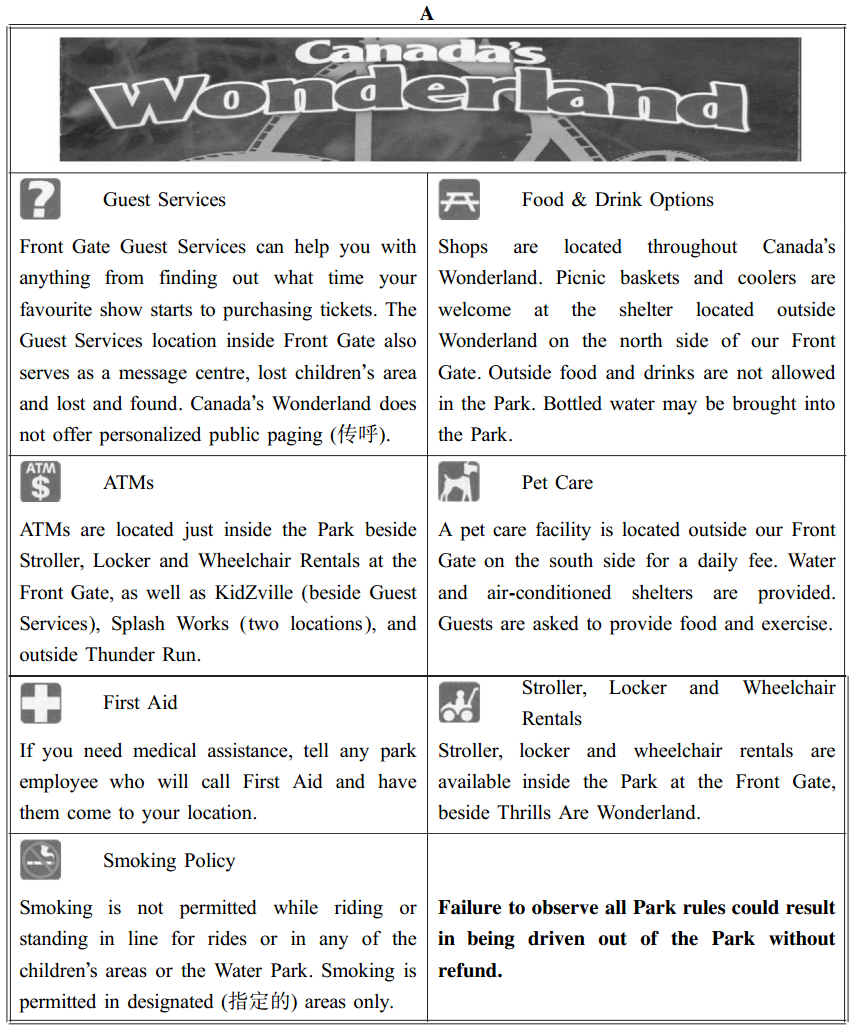 56.The leaflet is to inform visitors of the Park’s________
A. advanced management B. thrill performances
C. entertainment facilities D. thoughtful services

57.A visitor to the Park can________.
A. rent a stroller outside Front Gate B. ask for first aid by Thunder Run
C. smoke in the Water Park D. leave his pet at KidZville 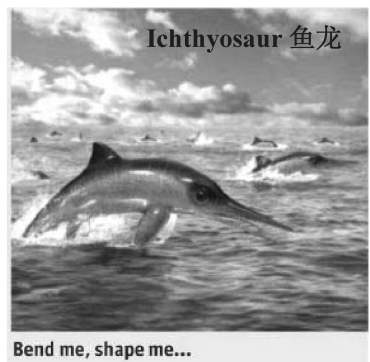 We’ve considered several ways of paying to cut inline: hiring line standers, buying tickets from scalpers (票贩子), or purchasing line cutting privileges directly from, say, an airline or an amusement park. Each of these deals replaces the morals of the queue (waiting your turn) with the morals of the market (paying a price for faster service).

Markets and queues—paying and waiting—are two different ways of allocating things, and each is appropriate to different activities. The morals of the queue, “First come, first served,” have an egalitarian(平等主义的) appeal. They tell us to ignore privilege, power, and deep pockets.
The principle seems right on play grounds and at bus stops. But the morals of the queue do not govern all occasions. If I put my house up for sale, I have no duty to accept the first offer that comes along, simply because it’s the first. Selling my house and waiting for a bus are different activities, properly governed by different standards.

Sometimes standards change, and it is unclear which principle should apply. Think of the recorded message you hear, played over and over, as you wait on hold when calling your bank: “Your call will be answered in the order in which it was received.” This is essential for the morals of the queue. It’s as if the company is trying to ease our impatience with fairness.

But don’t take the recorded message too seriously. Today, some people’s calls are answered faster than others. Call center technology enables companies to“score” incoming call sand to give faster service to those that come from rich places. You might call this telephonic queue jumping.
Of course, markets and queues are not the only ways of allocating things. Some goods we distribute by merit, others by need, still others by chance. However, the tendency of markets to replace queues, and other non-market ways of allocating goods is so common in modern life that we scarcely notice it anymore. It is striking that most of the paid queue-jumping schemes we’ve considered—at airports and amusement parks, in call centers, doctors’offices, and national parks—are recent developments, scarcely imaginable three decades ago. The disappearance of the queues in these places may seem an unusual concern, but these are not the only places that markets have entered.

58.According to the author, which of the following seems governed by the principle“First come, first served”?
A. Taking buses. B. Buying houses.
C. Flying with an airline. D. Visiting amusement parks.

59.The example of the recorded message in Paragraphs 4 and 5 illustrates.
A. the necessity of patience in queuing B. the advantage of modern technology
C. the uncertainty of allocation principle D. the fairness of telephonic services

60.The passage is meant to .
A. justify paying for faster services B. discuss the morals of allocating things
C. analyze the reason for standing in line D. criticize the behavior of queue jumping

C
If a diver surfaces too quickly, he may suffer the bends. Nitrogen(氮) dissolved(溶解) in his blood is suddenly liberated by the reduction of pressure. The consequence, if the bubbles (气泡)accumulate in a joint, is sharp pain and abent body—thus the name.If the bubbles form in his lungs or his brain, the consequence can be death.

Other air-breathing animals also suffer this decompression(减压) sickness if they surface too fast: whales, for example. And so, long ago, did ichthyosaurs. That these ancient sea animals got the bends can be seen from their bones. If bubbles of nitrogen form inside the bone they can cut off its blood supply. This kills the cells in the bone, and consequently weakens it, sometimes to the point of collapse. Fossil (化石)bones that have caved in on them selves are thus a sign that the animal once had the bends.

Bruce Rothschild of the University of Kansas knew all this when he began a study of ichthyosaur bones to find out how widespread the problem was in the past. What he particularly wanted to investigate was how ichthyosaurs adapted to the problem of decompression over the 150 million years. To this end, he and his colleagues traveled the world’s natural-history museums, looking at hundreds of ichthyosaurs from the Triassic period and from the later Jurassic and Cretaceous periods.

When he started, he assumed that signs of the bends would be rarer in younger fossils, reflecting their gradual evolution of measures to deal with decompression. Instead, he was astonished to discover the opposite. More than 15% of Jurassic and Cretaceous ichthyosaurs had suffered the bends before they died, but not a single Triassic specimen(标本) showed evidence of that sort of injury.

If ichthyosaurs did evolve an anti-decompression means, they clearly did so quickly—and, most strangely, they lost it afterwards. But that is not what Dr Rothschild thinks happened. He suspects it was evolution in other animals that caused the change.

Whales that suffer the bends often do so because they have surfaced to escape a predator (捕食动物) such as a large shark. One of the features of Jurassic oceans was an abundance of large sharks and crocodiles, both of which were fond of ichthyosaur lunches. Triassic oceans, by